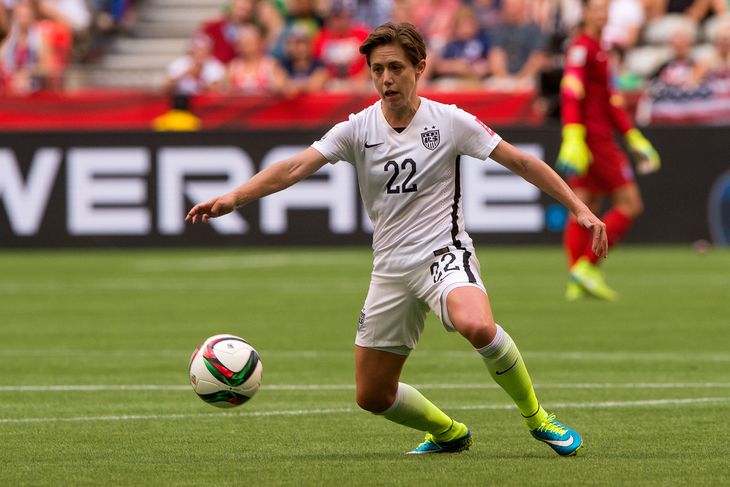 Our favorite duo started the game! Wambach and Morgan!

The first few minutes of the game was super exciting. A set piece with a cross in by Carli Lloyd was almost a goal on the first possession. Nigeria did a good job of keeping their defensive line up, creating 2 off-sides situations.

That was the last time Carli Lloyd did anything of merit. Even the announcers were stating that she gave the ball away too much and her shots were poorly timed. She doesn’t play a full game, meaning she plays when she wants to play. She is a mid-fielder, and she either has to be a defensive midfielder, or someone who runs the full pitch. She does neither. She doesn’t run hard up and down the pitch, nor does she maintain a defensive position in the back. She had this same problem before, in the Olympics and previous World Cup. Why play a person in a position that requires motivation, the ability to run, and get back and forth who absolutely does not want that?

I’m not so super impressed with Holiday either. She equally does not seem to be in any type of mid-fielder position. Where is she half the time?

When does our mid-field even mark their player? It’s ridiculous.

Our mid-fielders also never seem to be forward when they need to be either. It’s like they don’t understand basic soccer. When you pass the ball, you are not done playing. I watched a few passes that should have been a great give-and-go that turned into nothing because there wasn’t anyone forward to pass the ball to.

Megan Rapinoe did a good job again. I have been noticing that she holds the ball too long. I’m not sure if she just doesn’t trust the people around her to pass to or what? I would love someone to answer that for me.

Julie Johnston played a great game. I was impressed by the beating she took by Nigeria. There were a couple of times that they just barreled right into her. That’s one tough girl. She plays hard. Lloyd and Holiday could learn a thing or two from her.

I have a crush on the defender Meghan Klingenberg. She plays so tough as well. I always look forward to watching how she defends.

Alex Morgan did fairly well with her first start. I think she will improve as she plays more games.

Sydney Leroux played terrible, again. She lost the ball, couldn’t keep possession, and just overall made bad passes. I find her incredibly beautiful and I love looking at her, but her game is crap.

As for Abby! Her scoring the goal could not have happened to a nicer person. All the haters out there saying she is washed up. Everyone complaining about her missed headers. Well, screw you. She made an amazing goal. Also, her passes were usually on target, unlike the rest of the team. Yes, she looks slow as shit out there, but, hey. She’s not done yet.

I feel like there is no respect shown to Abby. How quick everyone is to write her off.

Today’s matches will tell us who the USWNT plays going forward. I’m excited for the games to come.